Riding dirt bikes is great fun and there's no reason women can't join in the adventure. The keys to success are getting the right bike, having a safe place to practice, and riding at your own pace. When it comes to buying a dirt bike the basic criteria of choosing a bike based on the available riding area, the dirt bike's size, weight, the rider's personality, and athletic ability is the same for all riders, men or women. Here are a few things beginning women riders should think about when considering buying a dirt bike, or deciding if it's a sport they would enjoy.

All adult dirt bikes have clutches - the only bikes with auto-clutches are those for small children and they're too small for adults. It's not really that hard to get the hang of using the clutch. The clutch is hand-operated by a lever on the left handlebar, and the shifter is foot-operated by a lever down by your left foot. If you can learn to shift a stick-shift car you can certainly learn to shift a dirt bike. You'll stall quite often in the beginning just as most people do when learning to drive a stick-shift car, but that's all part of learning to ride a dirt bike. Even the pros stall now and then. If the idea of learning to use a clutch seems overwhelming, consider taking the MSF Basic Rider Course or watch their How-To Ride DVD. They also have a Dirt Bike School, but it's not as widespread as the Basic Rider Course. Here's a link to our Basic Rider Safety Course post and the MSF How to Ride a Dirt Bike DVD post.

You probably know that you need to buy safety gear long before you buy a dirt bike, but it can't hurt to mention it again (and again). Although the full outfit of helmet, goggles, gloves, jersey, pants, boots, chest protector, and neck brace is a good idea, the first and most important item is a good dirt bike helmet, preferably one with a Snell rating. If you need more info about dirt bike helmets you can check out our Buying a Dirt Bike Helmet post. There are many online stores that sell women's dirt bike and motocross gear so try searching for 'women's dirt bike gear' and 'women's motocross gear' which should bring up the various online stores. Some of the manufacturers are Fox, Shift, Alpinestars, MSR and Answer. 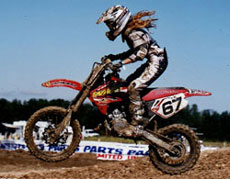 Seat height is one of the biggest safety considerations for beginner riders, and is especially important for women riders, who are typically shorter than men. All beginner dirt bike riders lose their balance no matter how careful they are, and being able to touch the ground will definitely lower the number of times you and your bike actually hit the dirt (and will need to be lifted back up). You want to be able to keep the bike upright when you stop or stall, so being able to touch the ground with at least one foot is important and the bigger (read: heavier) the bike, the more important this becomes. Touching the ground with the just balls of your feet is fine, but if the bike is a kickstart, you're going to be hating life every time you try to start the bike if you can't reach the ground with at least one foot in order to steady the bike when kickstarting.

Men are taller (more leverage) and have more muscle mass (strength), so picking up a 250 pound bike is less of a struggle for men than it is for women. You're going to be riding off-road so the ground might be rutted, muddy, or full of slippery trees roots, which makes lifting the bike even more of a chore. Don't assume that a smaller bike weighs less. Entry level beginner dirt bikes aren't normally built with high-end components. They're meant to be casual trail bikes, not race bikes where light weight is very important. The bike's weight will also come into play when loading and unloading the bike on a truck or trailer because the bike will need to be pushed up the ramp onto the truck or trailer, so if you're going to be loading the bike by yourself take that into consideration and try pushing the bike around the dealer's parking lot before buying. 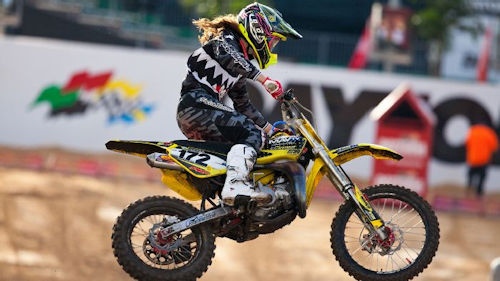 Motocross is a very aggressive sport. It's fast, furious, and sometimes unforgiving, but also loads of fun. You won't find any princesses or divas on the motocross track. A big drawback for women wanting to ride a motocross bike is the tall seat height of most mx bikes, and most of the smaller (250cc) motocross bikes do not have electric starters yet, which makes the tall seat height even more of a problem because they need to be kickstarted. The other drawback (for beginners) is the snappy power delivery of motocross bikes. Even the four strokes are made for short, fast bursts of speed. If you want to try motocross it would be really helpful to have someone show you the ropes and explain the safety procedures and track etiquette before you plunk down thousands of dollars for a bike you'll be too intimidated to ride. Spend a day or two hanging out at the track and see if you can find someone willing to help you get started. **Image credit - the two photos on this page are of Ashley Fiolek (#67) and Hannah Hodges (#172), two very successful women motocross riders.

With so many different dirt bike models out there, figuring out the best beginner's dirt bike isn't easy and it can be even tougher for women. A few choices for adult-sized beginner four stroke trail bikes are:

The four stroke motocross bikes are:

You can also check out our Beginner's Dirt Bike article for more detailed info.

Two stroke dirt bikes are an absolute blast to ride whether track or trails, but they may not be the best choice for a beginner. If you have some experience, you should be fine with the two stroke but total beginners might want to stick with a four stroke. The Kawasaki KX100 is a two stroke and has a low 34.3" seat height, but don't let its small size fool you. This little bike can rip!

Almost all beginner trail bikes now have electric start but if you're buying an older used bike or a motocross bike it may be kickstart only. Before you buy the bike make sure you try kickstarting it yourself, especially if you're a bit on the short side. Don't let the dealer or seller do it for you. If you'll be riding the bike out on trails you can usually find something to stand on to get more leverage, but there aren't many logs, rocks, or stumps on a motocross track. Sometimes the bikes have e-start with a kickstart as a backup, but even if the bike does have electric start it might not be a bad idea to try kickstarting it just to get the hang of it in case the e-start craps out on you one day.

Here are two videos highlighting the (somewhat difficult) kickstarting process. In the first video it looks like she's on a Honda 150f, and it's kind of fun to watch although she never actually gets the bike started, even though she's tall enough to reach the ground easily. The second video is a woman on a Yamaha TTR 125. The sound isn't the best but it does a good job of showing the kickstarting process. She finally gets the bike to fire at 2:30.